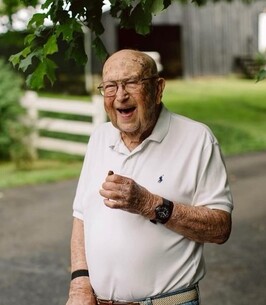 Devoted Son, Husband, Father, Grandfather, Great Grandfather Lawyer, Historian and Friend Conley Glen Wilkerson, 95, died August 3, 2021 in his home at Sugar Bush Farm, Perryville, Kentucky. He was born in Earlington, Kentucky on December 30, 1925. After graduating from high school in 1944, he served aboard the United States Navy Destroyer, USS Frazier, in the Pacific Theater until the end of the war. After the war, he attended Transylvania University where met and married JoAnn Bruce of Perryville, also a student at Transylvania. A graduate of the University of Kentucky College of Law, he represented the Internal Revenue Service as a trial attorney until retiring in 1985.
After his retirement, Conley and JoAnn moved back to Sugar Bush Farm in Perryville, where he grew roses, worked around the farm and played golf with friends. When the farmhouse partially burned in the 1990s, he dedicated himself to its restoration. He loved choral music and sang in the First Christian Church choir, The Black Heritage choir and later in The Summer Singers formed by Barbara Hall of Centre College. He sang with the Summer Singers until into his 90 's.
Conley served for several years as Boyle County Domestic Relations Commissioner. He loved history and lectured on the subject to various groups. He loved to laugh, tell stories and smoke cigars. He was the living epitome of a gentleman.
He was a strong Christian and member of First Christian Church of Perryville. We are assured that he has a Heavenly Home. May God bless his soul.
Conley is preceded in death by his wife, JoAnn Bruce Wilkerson of Danville, Kentucky and his mother, Myrtie Lane Carnal, father, Roy Wilkerson, sister Arreta B. Ligon and brother Kerny Lee Wilkerson.
He is survived by his daughter, Lucy W. Hoertz, son-in-law Scott Hoertz, daughter Nancy W. Wilder, son-in-law Michael Wilder; grandchildren, Rachel Hoertz, Charlie Hoertz and his wife Rachel Lane Hoertz, Ellis Wilder and his wife Kathy Wilder and Lizzy Wilder Haynes and her husband Aaron Haynes; great-grandchildren, Bella, Maddie and Scotty Hoertz, Wilder and Monroe Haynes and Johannah and Maggie Wilder.
Visitation will be 5-7:00 p.m., Friday, August 6, 2021 at Walden Funeral Home Perryville 207 South Bragg Street. The funeral service will be 11:00 a.m., Saturday August 7, 2021 at the First Christian Church Perryville 205 E. Third Street. Interment will follow in Hillcrest Cemetery with military honors.